This coming weekend is one of my favorites of the year, as it is time for STAPLE!

STAPLE!, the brainchild of my good friend Chris Nicholas, is Austin, Texas’ first and only independent comics convention. You can find a write up on Ain’t it Cool News. I’ve served on the organizational committee since the beginning (last year), and I can tell you that STAPLE! is gonna rock your socks off this weekend.

But there’s more than that. You bet your sweet bippy (what the fuck’s a bippy?!).

So, here’s a rundown of what I’ll be doing STAPLE! weekend, and an open invitation for both of you to come along, as well.

Austin Books is by far the greatest comics shop in Texas (until The Austin Comics Ring shuts it down in a bloody conflict… bloody!). Well, come out at eight and join us for free pizza and beer and some good conversation with some great comics creators.

You probably don’t need me to explain this. I’ve mentioned them both on here enough in the past. We’re going, though. We gonna get drunk, and dance, and look at hot women in tattoos… and get drunk. You better fuckin’ be there!

Here we go! Eight hours of comics madness. I’ll be sharing a table with Rafael Navarro, and I’m bringing a cooler full of suds with me. Come by, and point and laugh!

Sunday is for Exhibitors only. Sorry kids. We gotta recover sometime.

Okay, not really, but I’m running low on clever titles this morning.

So, here’s the deal. How did the rest of my birthday weekend go? It blew down fuckin’ doors. Don’t look at me like that. It really did.

First came Friday night and the Asylum Street Spankers DVD release show. Incredible show in a cool venue, a place called Ruta Maya (never heard of it before). Matt the Electrician opened, gaining many new fans. Really, though, anybody who closes their set with Danzig’s “Mother” while playing the world’s tiniest banjo deserves every fan he gets.

Got to talk to various spankers for a few minutes, and I got to see Shawna kung-fu the neck off of a beer bottle without even realizing it (I’ll have to tell you the full story in person sometimes. It’s really not that exciting unless I’m making hand gestures). Made it home slightly after one (at which point Sick from the spankers was already on the road to New Orleans) and crashed.

And on to Saturday.

Great party Saturday night, with most people bringing me alcohol-based birthday presents. Does that say something about me? I want to know who opened the rum Randy brought, though. When I find you, there will be hell to pay (or apologizes, if Randy opened it). April Fool’s Day and the Dawn of the Dead remake were watched, much beer was drank, and we never even had to plug in the playstation Tess brought with her.

I had planned to have pics to show you, but I forgot to take any.

So thank you everyone for an incredible 29th. We’ll do it again next year.

My mood today can best be described as…

Last night, Shawna committed to the brave task of driving me downtown during rush hour traffic so I could have a burger from Hut’s Hamburgers on my birthday. Hut’s is my second favorite burger place in town (my first being The Boulevard, which nobody else understands).

Hut’s, located right on Sixth Street perilously close to a ravine, offers more than 20 different burgers. Multiply that by your choices of meat (Beef, Chicken, Veggie, All Natural Longhorn Beef, and Buffalo), and you got yourself a lot of choice. I chose the number eight, Arnold’s Best. It’s a third pound of beef with Swiss, Lettuce, bacon, and Guacamole. I ordered it no Guac, because I don’t tolerate condiments that look like they’ve already been digested once.

And I ordered the Buffalo.

Buffalo meat has now become my favorite medium for edible murder. Incredible stuff. I might go back for another this weekend. Trust me. If you get the chance to eat a buffalo burger, take it. You will not be let down.

This article hit less than two hours after my last post. Suck it, citizens! I am your new leader!

Today is my birthday, and I’ll be celebrating with eight hours of work and a hamburger. Hells, yeah!

But I have heavier matters on my mind, things that cannot slide.

I have to talk about American Idol.

I have an off/on affair with The Idol. I’ve watched every other season… sort of. Watched all of the first, none of the second, about half of the third (before I realized how much I hated the concept of guest judges, and none of the fourth. Well, I’m watching the slow death stage right now, but I probably won’t watch the theme weeks unless they somehow involve Kelly Clarkson in her dirty prom queen outfit dancing around a stripper pole. 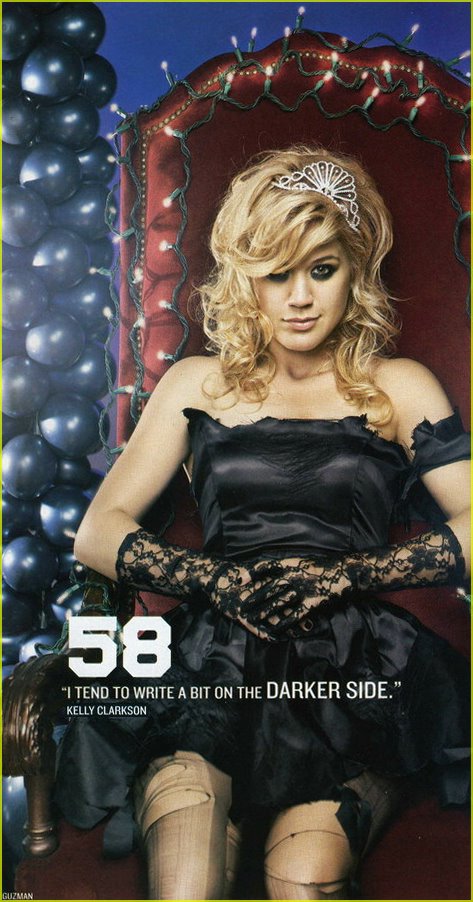 Dance for me, Kelly. I love you!

Not much to remember on the girl’s side, mostly “Cute, Peppy Girl (sang “Midnight Train to Georgia”)” “Very Talented Girl (sang Heart’s “Never”)” and “Rich Basketball Girl (she can sing, but I hate her rich jock ass).” Really, I don’t think the girls can withstand the guys onslaught.

This will only work with maybe six or less contestants left, and it would be a can’t miss if a woman makes it to the final two. All she has to do is sing her song, and when Ryan Seacrest comes out to talk to her on LIVE television, she needs to say…

“If I win this year’s American Idol, I’ll pose in Playboy.”

Think about it. If Nikki McKibbin (who?) had said this, we’d all be wondering what happened to that nice Clarkson girl.

So there you go, wisdom from me to the Idol contestants. Use it; don’t use it. Like I give a shit.

Hey, Kelly. How ’bout you get wet and roll around on the floor with my girlfriend. Sound good?

Finished the second draft (after the very rough draft) of Run Like Hell yesterday while I was waiting for the Time Warner folks to come fix my internet connection. It’s now in good enough shape for me to try and find some readers to give me opinions. Any takers?

Really, though, I want to talk about something else right now.

I want to talk about fog.

Sometime during the night, somebody picked up Austin, Texas and moved it into the middle of London, England. It’s like walking through pea soup out there today. And I love it. I’ve always loved fog. It’s mysterious, spooky, and all-together ooky.

Many years ago, when I was a kid with a bad haircut in kindergarten, I remember looking out at the playground after some fog had rolled in from where ever fog comes from in Indiana. I could just see the vaguest outlines of the slide and swingset through this misty haze, and it looked so cool. I liked to think there were monsters in that fog, horrible things that would eat my classmates and myself if we were dumb enough to leave the classroom.

Now, I’m a day away from being 29, and I still like to think there are monsters in the fog. True, the monsters have taken on a different form. Where they were once werewolves and vampires, they’re now slick, rolling alien creatures and republicans. I still love monsters, though, because they make life interesting, and sometimes that’s enough.

You’re probably asking “Nate, what does a writer who has made a total of $26.41 off of his writing do on a Saturday? It’s probably pretty wild, huh?”

You have no idea.

12:15PM – The girlfriend takes off for her parents’ house. The duplex is now mine, and the festivities begin.

12:20PM – 4PM – Proofread the rough draft of Run Like Hell. Realize I need to chop out at least two chapters. There are a few White Russians in this time frame.

4:30PM – I go check the mail. The Electrifying Conclusion, a DVD of Guided By Voices’ last show, has come in through Netflix. I decide to watch it.

7PM – 9:30PM: I finish The Electrifying Conclusion, wondering at various times how Robert Pollard felt the morning after the show and if Joy has their A-Squad working tonight.

Circa 9:30PM: The girlfriend returns and asks if I want to watch a movie. I respond by falling asleep within minutes. I wake up the next morning to find a warm White Russian on my nightstand. I decide I am a sad man and must change.

So, that’s what my typical Saturday is like. You notice a lack of fast cars, fast women, or anything remotely interesting. Aren’t you glad you asked?

So, Sunday morning I get up, take a shower, and get ready to head to the Mecca that is Pflugerville so I can help judge at my brother-in-law’s martial arts tournament. No big deal. Done it more than a few times before.

Then I go to get in the car and remember that my street is part of the Austin Marathon route.

So, I call my sister to let her know I won’t be making it out without engaging in some vehicular homicide, and then I grab my copy of Tim Lebbon’s Beserk and start reading. Sunday begins.

Y’know, I don’t begrude these poor, stupid people who think running 26 miles without being chased is a good idea, but damn, they’re slobs. It was rainy yesterday morning, and apparently a big black garbage bag is the Austin rain-slicker of choice. How do I know this? Because the runners had discarded these black plastic monstrocities all up and down my street. I wish I could have caught the bastard who dumped their garbage bag in my yard, because I’m pretty sure a flying tackle would have thrown him off his best time. Get what I’m saying?

Have a nice Monday.

Show Will Continue Despite Terrorist Threat

Austin, TX: In the early morning hours of February 14th, a Valentines Day that will live forever in cartoon infamy, the discussion forum of Staple! — Austin’s premier independent media convention — was hacked by a group of comic-book hating extremists known as the Islamic Warriors.

“We don’t know what they have against us, but we can guarantee that we will not bend to the demands of a few freedom-hating jug-heads,” said Chris Nicholas, convention impresario and local comic personality. “The show will not only continue as planned, but it will be bigger and better than ever before.”

The shady Islamic Warrior organization is known for their devotion to both Archie comic books and international jihad, a combination that has left many confused and unwilling to claim an alliance. While fellow extremists have a hard time understanding the Islamic Warrior’s love of American light soap opera and high school funnies, Archie fans find their commitment to global insurrection unsettling and out of synch with the multicultural values of Riverdale.

(Screenshot of the damage. Not use of the “Archie” font.)

“Those guys are real Reggies,” said one enthusiastic fan, wishing to put distance between his beliefs and those of the mean-spirited hackers.

Experts believe that there is some connection between the Staple! Hacking and the Danish cartoon controversy. However, the Staple! Independent Media Expo feels that freedom of expression is integral to the artistic process.

“We don’t care who knows it,” said Nicholas. “We love the first amendment, and we won’t be stifled by those who want to rob us of our natural right to discuss our independent media-related dreams. We have absolutely nothing against Islam, or any religion. Except for the hacking our website part, which is probably not in any holy book. Maybe Scientology has something in there, in the back.”

John L. Goldwater, creator of the modern Archie, could not be reached for comment. He is dead.