Down, my novel about a rock band that survives a plane crash only to face something much worse, is now available from Amazon.Â  I’m not kidding when I say this is probably the best work I’ve written to date.Â  There’s a balance between mood and scares that I don’t think I’ve managed to pull off before.Â  All wrapped up in a tight package, Down is a weird, slightly cosmic kind of story.Â  I hope it catches you by surprise. 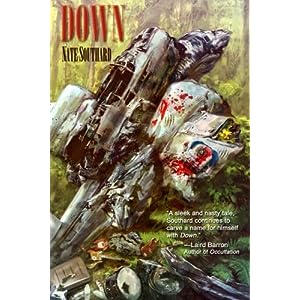 “A sleek and nasty tale, Southard continues to carve a name for himself with Down.” – Laird Barron, author of Occultation and The Croning.

In 1992, The Frequency Brothers board a plane following a sold out concert in Austin, Texas. The plan is to fly to New York to shoot their next video.Â Â Â Â
But then their plane goes down.Â Â Â Â

Injured and stranded in a seemingly endless forest, The Frequency Brothers now find themselves fighting for survival. Everywhere they look, they see signs that they are not alone, that something waits in the darkness. They can hear it, and it sounds angry. Thereâ€™s something else out there, though. Something much worse.Â

And it wants to drag them Down.Â

I’ve decided it might be a good idea toÂ let you fine folks in on what I’m reading at any given point and whether I think it’s worth a recommendation.Â Sure, you might say that’s because I need blog material.Â  And sure, you’d be right.Â  Still….

This one’s a few years old, and I just got around to it last month.Â  An entertaining addition to the “shit goes nuts” style of crime thriller, where things just get worse with each twist and turn and there’s little room to breathe, Yellow Medicine is full of cracking prose, frozen atmosphere, and some wonderfully ruthless villains.Â  A deputy is asked for help by a local girl he’s been crushing on.Â  Her boyfriend appears to have run into some trouble with some shady characters, and she wants the deputy’s help.Â  What follows is a roller coaster of meth dealers, severed heads, shootings, frame jobs, and terrorists, and every page of it is exciting.Â

While I enjoyed the hell out of the book, I’m a little disappointed in the main character.Â  The book’s “hero,” Deputy Billy Lafitte is so crooked Vic Mackie would probably shake his head in disappointment.Â  He’s so thoroughly rotten that I can’t root for him at all.Â  Wanting the hero to fail isn’t a good sign, no matter how thrilling a book is.

THE BALLAD OF BALLARD AND SANDRINE by Peter Straub

Ballard and Sandrine are lovers and the stars of this gripping novella.Â  Their story takes place over the course of twenty-five years and largely on a mysterious yacht that’s motoring its way down the Amazon.Â  They never see the ship’s crew, and they can’t identify the wonderful food they’re fed.Â  Slowly, they explore more of the ship and learn some of its secrets, and what they find is truly horrific.Â  I’d tell you more, but peeling back the layers of this particular story is most of the fun.

Peter Straub remains an amazing writer because of his ability to let a story unfold in a way that’s both natural and ominous.Â  The more we learn about both the yacht and our protagonists, the deeper the horror takes root.Â  By the end of this all-too-short novella, I was afraid to turn the page.Â  I can’t recommend this one highly enough.

Depending on your point of view, this one is either a short novel or a long novella.Â  Either way, it’s a wonderful peek into the mind of a deranged narrator.Â Â Using sparse language, Cashtown Corners tells the story of Bob Clark, owner of a gas station and a man losing his grip on reality.Â  When he murders a woman for what appears to be no reason, he sends his life hurtling down a new path, and he drags the reader along for every macabre step.

Burgess, who previously wrote Pontypool Changes Everything, tells this story with a voice that’s so measured and almost clinical that at times it feels like a true crime book.Â  It makes some of the book’s later developments,Â one of which is delivered byÂ a chapter that consists of a single line, that much more shocking.Â  Grab this one as soon as you can.